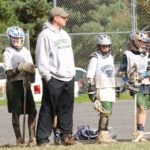 Tucker Kear has twelve years of college coaching experience, both in Division 1 and 3.  Kear was most recently the head coach at Skidmore College. Prior to that he served as offensive coordinator for Dartmouth College.  Kear re-started the program at Bard College in 2012, earning the most wins the program has ever seen in his first year as Head Coach at Bard.  Before that, Kear started his college coaching career at Union College in Schenectady New York, where he earned National Division 3 Assistant Coach of the year in 2012.

Kear played midfield and attack for Division 1 lacrosse programs at the University of Massachusetts and Butler University in Indianapolis.

Coach Kear is from South Salem, New York and attended John Jay High School in Westchester County.  He was a two time all section player there, three time all League and two time participant on the Hudson Valley Empire State Games team.

Coach Kear’s father started the program in 1972 at John Jay High School and his brother Chris, a multiple time Section 1 coach of the year award recipient, most recently won the New York State Championship this past June while serving as the head coach at Pleasantville High School in Westchester County.

Kear received a degree in English literature from The University at Albany in 2006. He played Division I lacrosse at UMASS Amherst and Butler University.