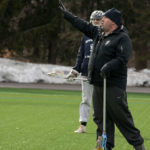 Hayes graduated from Shenendehowa High School in 1994 where he played attack and faced-off. He then played at Hudson Valley Community College from 1994-1997 and onto Limestone College from 1997-1999. He has also coached and played internationally for the Altona Lacrosse Club in Australia from 1999-2000.