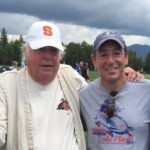 Mark Ventra has been an assistant at Saratoga Springs High School since 2013. He has also coached youth and club programs since 2003.

Ventra played midfield and attack at Skidmore College where he was a 4 year starter. Here, Ventra was named a member of the Skidmore Athletics Hall of Fame. During his playing career at Skidmore, his record was 36-15, the best 4 year record in Skidmore lacrosse history.

Ventra is from Syracuse where he attended Christian Brother’s Academy in Syracuse. He was a three year lettermen in lacrosse. Ventra started playing lacrosse in middle school in 1973 and still plays adult leagues while playing in the Lake Placid Summit Tournament.